State of the European furniture industry 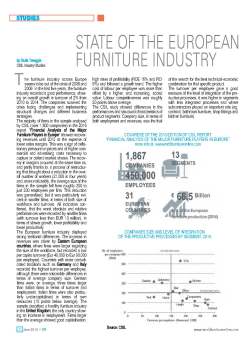 According to an article issued in the latest number of CSIL International Market Review “World Furniture” (#70, June 2016), the furniture industry across Europe seems to be out of the crisis of 2008 and 2009.

In the last five years, it recorded a good performance showing an overall growth in turnover of 2% from 2010 to 2014.

COMPANIES STRUCTURAL CHANGES AND BUSINESS STRATEGIES TO FACE THE CRISIS

The majority of firms in the sample analysed by CSIL (over 1,800 companies) in the 2016 report “Financial Analysis of the Major Furniture Players in Europe” showed recovering revenues until 2012 at the expense of lower sales margins. This was a sign of deflationary pressure on prices and of higher commercial and advertising costs necessary to capture or defend market shares.

The recovery in margins occurred at the same time as, and partly thanks to, a process of restructuring that brought about a reduction in the overall number of workers (21,000 in four years) and, more noticeably, the average size of the firms in the sample fell from roughly 250 to just 200 employees per firm. This reduction was generalised, but it was particularly evident in smaller firms, in terms of both size of workforce and turnover.

All indicators confirmed, that the worst absolute and relative performances were recorded by smaller firms (with turnover less than EUR 10 million), in terms of slower growth, lower profitability and lower productivity.

The increase in revenues was driven by Eastern European countries, where firms were larger regarding the size of the workforce, but recorded a low per capita turnover (Eur 40,000 to Eur 90,000 per employee).

Countries with more consolidated traditions such as Germany and Italy recorded the highest turnover per employee, although there were noticeable differences in terms of average company size: German firms were, on average, three times larger than Italian firms in terms of turnover and employment. Italian firms were also particularly undercapitalized in terms of own resources (10 points below average).

The sample described a healthy furniture industry in the United Kingdom, the only country showing an increase in employment. Firms larger than the average showed good capitalisation, high rates of profitability (ROE 16% and ROI 9%) and followed a growth trend. The higher cost of labour per employee was more than offset by a higher, and increasing, added value. Labour competitiveness was roughly 20 points above average.

PERFORMANCES AND CHARACTERISTICS OF PRODUCTS

Company size, in terms of both employment and revenues, was the fruit of the search for the best technical-economic combination for that specific product.

The turnover per employee gave a good measure of the level of integration of the productive processes; it was higher for instance in segments with less integrated processes and where subcontractors played an important role (eg. contract, bathroom furniture, shop fittings and kitchen furniture).