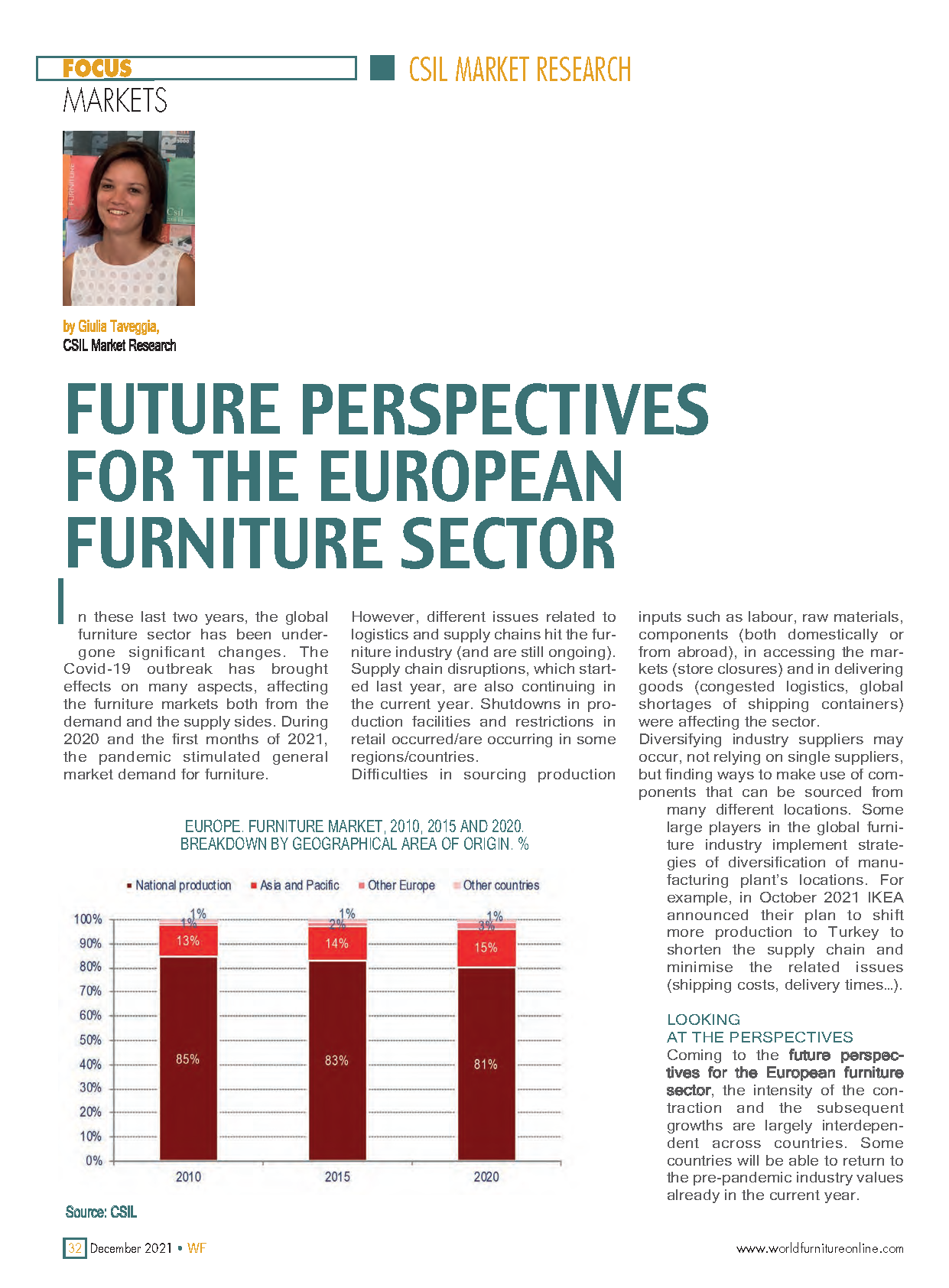 The global furniture sector has been undergone significant changes in the last two years. The Covid-19 outbreak has brought effects on many aspects, affecting the furniture markets both from the demand and the supply sides.

According to CSIL (‘World furniture outlook’ December 2021, and ‘The furniture industry in Europe’, October 2021), during 2020 and the first months of 2021, the pandemic stimulated general market demand for furniture. However, different issues related to logistics and supply chains hit the furniture industry (and are still ongoing).

Supply chain disruptions, which started last year, are also continuing in the current year. Shutdowns in production facilities and restrictions in retail occurred/are occurring in some regions/countries. Difficulties in sourcing production inputs such as labour, raw materials, components (both domestically or from abroad), accessing the markets (store closures), and in delivering goods (congested logistics, global shortages of shipping containers) were affecting the sector.

Diversifying industry suppliers may occur, not relying on single suppliers, but finding ways to make use of components that can be sourced from many different locations. Some large players in the global furniture industry implement strategies of diversification of manufacturing plant locations.

For example, in October 2021 IKEA announced its plan to shift more production to Turkey to shorten the supply chain and minimize the related issues (shipping costs, delivery times…).

LOOKING AT THE PERSPECTIVES

According to the latest CSIL data, coming to the future perspectives for the European furniture sector, the intensity of the contraction and the subsequent growth are largely interdependent across countries. Some countries will be able to return to the pre-pandemic industry values already in the current year. For others, this will occur only in the medium term.

Germany was less affected by the crisis than other European countries. The business performance has been particularly positive in the second half of 2020 due to the catch-up effects after the first lockdown in Spring 2020 and the lower VAT rates. 2021 has been a volatile year for the German furniture industry, following the several-month lockdown from mid-December 2020 to May 2021, which has posed challenges in German manufacturers' order and delivery situation.

In 2022 prospects should improve (+4% in furniture consumption over 2021) and go back to normal in the medium term. Among the ten largest European furniture markets, the United Kingdom, Spain and France experienced similar deep contractions estimated to range from around -13% to -11% (in current EUR).

The EU furniture sector is highly integrated, both from a market and an industry perspective. Retailing activities and value chains are often organized on a European scale. Europe still plays an important role in the global furniture industry. However, major structural changes over the past decades at a world level have severely affected the area, gradually reducing its importance.

With over 1 million workers employed in around 127,000 manufacturing firms, mainly micro and small-sized, Europe’s production value reached nearly Eur 88 billion in 2020, accounting for around one-fourth of the global furniture industry. While remaining an SME-based industry, Europe is the headquarters of some of the biggest and most important global players.

According to CSIL research, 87 out of the top 200 furniture manufacturers worldwide are in Europe. It’s worth observing that European furniture production is becoming more global, both because several European companies integrated the value chains internationally and started producing outside Europe, and because of big acquisitions, mergers with international players, often interested in entering the luxury segment where European companies are forefront players.

With nearly 530 million inhabitants, Europe is the second-largest market in the world, coming after the Asia Pacific and before North America. Per capita furniture consumption levels, on average, are the highest in the world (together with North America).

Within Europe, the largest markets are Germany, the UK, France, and Italy. Altogether they absorb nearly 60% of the total European furniture consumption. The New EU members markets account for only 11% of the entire European market but grow faster than Western European countries.

The European market is highly integrated, with major chains and manufacturers working on a European scale. However, slight but continuing market openness is registered. The origin of products sold on the market has also changed and markets are continuously open to imported items. This is evident if we consider the last decade when national production share has been decreasing, while Asian and Pacific imports have been increasing.