Another positive year for office furniture in Europe

According to CSIL, 2017 was a positive year for the office furniture sector in Europe. Despite persistent uncertainties, the European production reached EUR 8,780 million in 2017 posting a 2% growth and reinforcing the performance of the previous year. 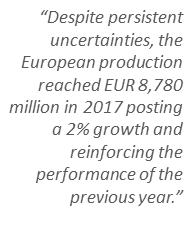 In 2017  European imports of office furniture amounted to EUR 3,173 million, showing an increase of 2.6% on the previous year. It is worth noting that about 72% of these imports come from members of the EU 28 + Norway and Switzerland.

The performance of exports was also positive with +1.9% compared to 2016, to reach a value of EUR 3,494 million. This positive performance was achieved thanks to the general growth of all European destinations and the increasing demand from North America, while Central-South America declined significantly. The Middle East market remained stable after the collapse of 2016. About 36% of European exports originate in Germany and Italy, which are also the main manufacturing countries of office furniture. Market openness is higher for Italy where exports account for over 63% of total output (27% for Germany).

The office furniture consumption in Europe increased by 2.2% in 2017 reaching a total value of EUR 8,459 million. Among the largest Western European markets Austria, France, Italy and Spain outperformed the European average (+2.2%). On the other hand, the situation in Belgium, Finland, Portugal and Switzerland remained weak. The figure for the United Kingdom is negative due to the effect of exchange rates (-2.4% in EUR and +4.8% in LCU). New European Member countries, representing 13% of the whole market, grew consistently and recorded +9.1% compared to the previous year. Poland and the Czech Republic are the largest markets of this group of countries and performed well in 2017.

The improvement in market conditions helped companies to increase investments, which reached 4.8% of total turnover in 2017. Machinery and production expenses, in particular, witnessed a rebound during the year. The competitive arena is showing significant evolution with unprecedented mergers among the players still underway. The competition watchdogs are active in evaluating single M&A operations that sometimes increase shares in domestic markets and sometimes help to expand the presence of certain players abroad. Even so, concentration is increasing and the top 10 manufacturers in Europe currently provide 29% of total production.