Ready to Assemble furniture market in Europe. Performance, trends and innovations by CSIL

According to CSIL report “The European market for RTA furniture”, the European consumption of Ready to Assemble furniture (aka flat-pack, knock down, DIY - do it yourself, self-assembly and kit furniture) reached a value of EUR 14 billion in 2015. 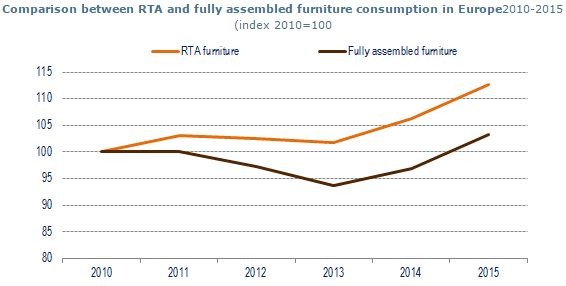 In general, the RTA furniture market showed a better performance throughout Europe than the "fully assembled" furniture market, scoring a +13% in the time period 2010-2015, against the +3% of the latter.

The consumption of RTA furniture in Europe is highly concentrated as more than an half of sales are made on three markets: Germany, France and the UK.

The Eastern European market, although still low in value, has been developing faster than Western Europe over the past five years.

QUESTIONS ANSWERED IN THIS REPORT