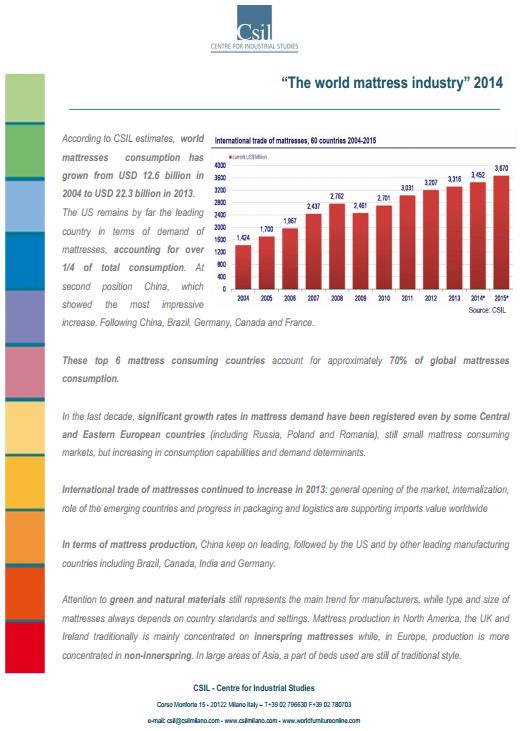 The US remains by far the leading country in terms of demand of mattresses, accounting for over 1/4 of total consumption. At second position China, which showed the most impressive increase. Following China, Brazil, Germany, Canada and France.

In the last decade, significant growth rates in mattress demand have been registered even by some Central and Eastern European countries (including Russia, Poland and Romania), still small mattress consuming markets, but increasing in consumption capabilities and demand determinants.

International trade of mattresses continued to increase in 2013: general opening of the market, internalization, role of the emerging countries and progress in packaging and logistics are supporting imports value worldwide.

In terms of mattress production, China keep on leading, followed by the US and by other leading manufacturing countries including Brazil, Canada, India and Germany.

Attention to green and natural materials still represents the main trend for manufacturers, while type and size of mattresses always depends on country standards and settings.

Regarding innovations in the foam segment, suppliers increasingly have introduced polyurethane foams that replace a portion of the petroleum–based content with bio–based ingredients. One of the priorities of the mattress industry suppliers is to find further ways to improve air flow, particularly in foam mattresses. A number of innovations incorporate phase change material, as well as other means, to bring temperature regulation to mattresses. Phase change materials store and release heat with changes in temperature, therefore Hybrid fillings for mattresses and especially fillings with gel, are increasingly popular among manufacturers. Gel can theoretically be combined with any type of mattress and offers new approaches in terms of ergonomics and comfort.

Regarding the latex segment, product trends in the category follow those in polyurethane foams. Latex with extra ingredients and new treatments are being brought to market. This product is still very new and might see space for growth.

Mattress industry is also gaining importance in contract market: projects for hotels, hospitals and military institutions are increasing, even for the opportunity for manufacturers to test new products in these fields.

Generally, mattress industry is a dynamic sector, facing innovations, research and development of materials, growing slowly but regularly in these last 10 years, recently marked out by essential company merge and acquisitions that drown interesting performances for players involved.