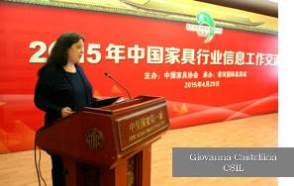 The 4th China Xianghe International Furniture Cultural Festival, China, is estimated to attract clients and professionals from more than 10,000 globally and nationally renowned furniture enterprises and more than 7,500 furniture brand names. During the festival, more than 100, 000 new and trendy furniture products are exhibited and displayed to the public. In the meantime, the festival becomes a significant platform where clients across the world deep their understanding of the investment environment of Xianghe furniture industry, investment policies, investment projects and local enterprises. The 4th China XiangheInternational Furniture Cultural Festival is dedicated to constructing a top-tier platform whereby professionals in the furniture industry can harvest high-quality dialogues with peers and seek top-notch consultancy and investment opportunities. Representatives from governments, non-governmental agencies, furniture enterprises, trade companies across the world attend the event.

Xianghe, deeply immersed in traditional Chinese culture, is a time-honored city. Since Ming and Qing Dynasty, Xianghe has been renowned for the industry of furniture. Hence, Xianghe has long been called the capital of furniture in China. Indeed, a multitude of furniture, which were widely used in royal palaces, gardens and mansion, were designed and produced by exceptional masters and artisans of furniture from Xianghe. During the three decades after the implementation of the milestone policy of opening up and economic reform, the furniture industry in Xianghe has been going from strength to strength.