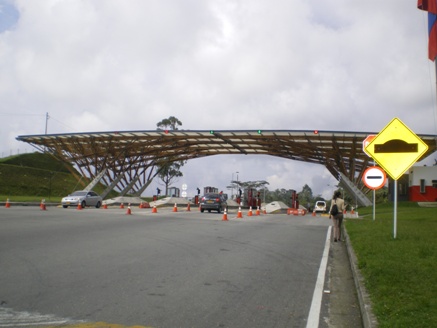 China, Indonesia and Vietnam are the major bamboo producers and exporters. Singapore and Hong Kong were important bamboo processing centres and exporters. South Africa is a quite big exporter followed by Latin American countries and Bangladesh.

In Europe the main importer of bamboo was France followed by the United Kingdom and Germany. The most important share of bamboo products imported by European countries consists of furniture and seats in bamboo, except for Netherlands that imports primarily veneered panels and similar laminated wood of bamboo.

Not only construction material for poor people in rural areas. Business related to products made with bamboo is strongly increasing, especially in crafts, furniture and textiles. An amazing material indeed! It can be eaten (marmalade, noodles) when it is some week-old, used for baskets when it's 1-2 year-old, and utilized as a construction material after 5-6 years.

Bamboo use can be enhanced through the application of modern engineering techniques. Bamboo can be processed into modern products that may successfully compete with wood products in price and performance. Bamboo charcoal is traditionally used as a substitute for wood charcoal or mineral coal. It can serve as a fuel, absorbent and conductor. Bamboo fibre is longer than wood fibre, which gives bamboo some technological advantages.

The panels are widely used in modern construction as structural elements or as forms for concrete moldings. They are also used for flooring, roofing, partitions, doors and window frames. Bamboo panels have some advantages over wooden boards due to their rigidity and durability as well.

Bamboo flooring is a quality product that can be widely used and has a large, global consumer market. It has certain advantages over wooden floors due to its smoothness, brightness, stability, high resistance, insulation qualities and flexibility. Bamboo flooring has a soft natural luster and maintains the natural gloss and elegance of bamboo fiber. About 200 species of bamboo can provide edible and palatable bamboo shoots.

For architectural purposes, Guadua (Guadua angustifolia Kunth) is the favorite among all world's bamboo species. Its diameter is consistent for the first 15 meters and then it becomes elegantly tapered at the top. These features have attracted the attention of civil engineers, architects, academics, designers, and artists.

Environmentally, Guadua is more effective in removing carbon dioxide from the atmosphere than most other tropical forest; ongoing studies in Colombia have now been coordinated by the Environmental Bamboo Foundation and the results are stunning. On the basis of such studies, Japan and the Netherlands have both undertaken massive forestation projects as a way of earning so-called "carbon credits" to offset industrial pollution.

The growing interest in sustainable building and materials represents a great potential for bamboo. More, there is a growing interest in 'human friendly' products originated from developing countries, i.e. products from which the (usually poor) local producers also can get a fair share of revenues.

Bamboo products produced in the country of origin can play an outmost relevant role in trade products and thus help in poverty alleviation. These facts, combined with the worldwide market appeal of the 'exotic' looking constructions made of bamboo, show that there is a niche for Guadua building products in Europe.