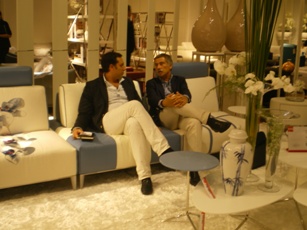 Despite the international crisis, China's production and consumption of furniture will record a further leap forward over the course of 2011: if the second semester of the year maintains the same growth trend as the first six months (as it probably will), production should reach US$ 160 billion (+24%) and consumption should exceed US$ 120 billion (+27%). Imports are nearing the US$ 2 billion mark (+30% in the first seven months) and exports are not having a bad time either (+13%). The large firms account for roughly a third of national production and two thirds of exports. The assessment of the overall performance of the market is based largely on the performance of exports.

According to Zhu Changling, Chairman of the China National Furniture Association (CNFA), Chinese furniture production will double over the period 2010-2015. Exports should increase considerably, but domestic consumption will be the principal driver of development.

Organised jointly by UBM Sinoexpo and CNFA, the Furniture China fair in Shanghai is the major annual appointment for the furniture industry, with attention paid mainly (but certainly not exclusively) to export activities. In just 17 years Furniture China Shanghai has grown to some 2,000 exhibitors and 600,000 square metres of exhibition space (60,000 more than the previous edition).

The 2011 edition was spread over three locations: in addition to the exhibition areas of Pudong (the main venue, with greater attention to exports) and FMC (components for the furniture sector) a third exhibition pole was set up in the JSWB mall (Global Home Furnishings Center) located in the Puxi area and basically targeting the local market. Over the next five years a further 400,000 square metres of exhibition area will be available (presumably the first 200,000 will be ready in 2013) with the priority aim of hosting a larger number of firms dedicated to the local market and making more space available for the office furniture sector (target 500 exhibitors, double the current number).

The increased availability of exhibition space will presumably lead to a greater number of large international exhibitors in Shanghai: it’s time for a new Italian “Collective” and the office sector is expecting the big multinationals (Steelcase, Herman Miller, Haworth…. all of them already with some kind of presence in China). Some of the larger foreign firms at Shanghai 2011 were Natuzzi, Gautier, Tempur and Kokuyo. The fair showcases “the best” of Chinese production, excluding kitchen furniture. The upholstered furniture segment is having some difficulty since it is more closely linked to exports, while the production of office furniture, hotel and contract furniture, and mattresses is “flying”. The next edition of Furniture China Shanghai will be held from 4 to 9 September 2012 and will also be hosting other happenings such as “The Sleep Event” in the section of the fair dedicated to hotel furnishings (Hotelex).

Strengths and weaknesses of the Chinese furniture industry

Having dominated the world market in the low price segment, the future growth of the Chinese furniture industry is tied to its penetration of the middle range and it already has all the makings: many of the leading firms (Kukafor upholstered furniture, Matsu for office furniture, Oppein for kitchens) today use a combination of Chinese, Asian and European designers for their own production.

Although promising modern styles have emerged in recent years, contemporary Chinese design has yet to re-emerge as the global force it once was.

Today first class technologies are available for furniture production in all the major districts, as can be seen by the rapid growth in local turnover for key suppliers such as Homag or Biesse. The structural lack of wood-based raw materials should be compensated by the direct investments of Chinese producers abroad, for example in Russia in the forestry and sawmill sector. The revaluation of the Remimbi (from a rate of 10 to the Euro, to the current 8) makes exports more difficult and imports more accessible. Also the availability of space for new plants, especially around Sichuan (furniture in wood) and Fujian (kitchens) should not be underestimated. In fact, the rise in the cost of labour in the “hot” areas (Shenzhen, Foshan, Anji, Shanghai, Beijing etc.) prompts newcomers to locate in less exploited areas of the country.

National distribution risks becoming a bottle-neck: Red Star, Kinhom and JSWB are national chains of furniture malls that manage to keep a large part of the sales margins for themselves. By way of an example, each of the three Red Star malls in Shanghai hosts at least a hundred permanent display areas on a total of six floors. You can find all the major international brands from the bath and bedding segment, but 90% of the display area is occupied by local brands in the middle and upper ranges. What is missing is a solid network of independent, multi-brand distributors for the small and medium-sized firms. Thus, the small firms have only two choices: continue to rely on more or less direct distribution (with agents in 20-30 cities) or to opt (paying a high price) for the large “furniture cities”. Nevertheless, there have been some experiments with franchising, for example HTL in the upholstered segment (Domicil brand).

European firms are faced with the demanding choice between exporting to China and producing locally. Some firms have failed in their attempt to produce locally (e.g. Decoro) or have chosen to sell to third parties (Faram). Undoubtedly, there have also been success stories, like Natuzzi (one of the best-selling brands in China, with Kuka, Lehoo and Cheers) and Colombini (children’s rooms, almost 100 sales outlets already opened, out of an ambitious objective of being present in 200 cities). At the upper-end dozens of firms have opened at least one outlet, including the Italians Boffi, Poliform, Flou, B&B, Minotti, Artemide and Scavolini. Single brand stores are usually between 200 (Artemide, on two floors) and 500 square metres (Scavolini). One successful example of a multi-brand outlet is undoubtedly Vita in Beijing (with 3,000 square metres).

The composition of purchases is somewhat different from that of typical European markets: kitchens are still relatively underrepresented and are showing strong growth (more closely linked to the construction sector than other segments) as are living rooms. Relatively more is spent on bedrooms, bathrooms, mattresses and upholstered goods. Looking at mattresses, we find the first price at IKEA of RMB 1,500 (about Euro 180), a middle range of around RMB 4,000-5,000, but also a growing range of imported products starting at RMB 20,000. The average price of a kitchen (excluding appliances) is in the region of RMB 10,000 (Euro 1,250), but Guangdong, Zhejang and Beijing have become important markets for German and Italian kitchens in the upper and middle ranges. At the top end of the market especially, there is frequent “bargaining” at the sales outlet, which usually leads to a reduction on the list price of somewhere in the region of 20%.

This is a typical Italian expression of wonder, astonishment, enthusiasm, and also the most popular musical of all time (45 million tickets sold). While Furniture China was taking place in Shanghai, Beijing was enjoying the Mandarin version of the musical Mamma Mia! We can express that same wonder for Furniture China. In the furniture business, as in musicals, shanzhai (the art of innovating starting with existing objects, "if you can do it….then I can as well”) is a step forward in new Chinese creativity.