FURNITURE RETAIL IN EUROPE. FIGURES AT A GLANCE

According to the CSIL report 'Furniture retailing in Europe' 2022, the European furniture market increased by 3% yearly. The decrease in 2020 was more than compensated in 2021 with a growth of about 10%, reaching almost Eur 140 billion (at retail prices). In 2021, all the markets surpassed their 2019 market size, thus fully rebounding from the pandemic. 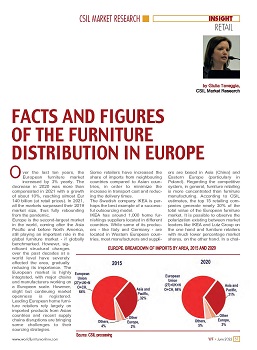 Europe is the second-largest market in the world, coming after the Asia Pacific and before North America, still playing an important role in the global furniture market - if globally benchmarked. However, significant structural changes over the past decades at a world level have severely affected the area, gradually reducing its importance.

The European market is highly integrated, with major chains and manufacturers working on a European scale. However, slight but continuing market openness is registered.

The leading European home furniture retailers rely largely on imported products from Asian countries and recent supply chains disruptions are bringing some challenges to their sourcing strategies. Some retailers have increased the share of imports from neighbouring countries compared to Asian countries, in order to minimize the increase in transport cost and reducing the delivery times.

The Swedish company IKEA is perhaps the best example of a successful outsourcing model. IKEA has around 1,000 home furnishings suppliers located in different countries. While some of its producers – like Italy and Germany - are located in Western European countries, most manufacturers and suppliers are based in Asia (China) and Eastern Europe (particulary in Poland).

Regarding the competitive system, in general, furniture retailing is more concentrated than furniture manufacturing. According to CSIL estimates, the top 15 retailing companies generate nearly 30% of the total value of the European furniture market.

It is possible to observe the polarization existing between market leaders like IKEA and Lutz Group on the one hand and furniture retailers with much lower percentage market shares, on the other hand. In a challenging trading environment with pressure on organic sales growth, an increasing number of retail companies are entering into mergers and acquisitions or partnership agreements to generate growth and benefits from economies of scale.

Over the last decade, the furniture distribution sector has experienced structural changes. In particular, analyzing the last three years (before and after the pandemic outbreak), the most important trends concerning the relative weight of distribution channels are the following:

Changing the behaviour of consumers has also affected the big supermarkets and hypermarkets. Their role and position in the retail landscape have changed in recent years.

Leading international furniture retail chains, such as IKEA and Maisons du Monde, are developing new store concepts regarding surfaces, locations, and function (such as planning or meeting points).

For more than half a decade, IKEA has been a single-format retailer. Still, recently, IKEA has been investigating new ways of meeting customer needs by establishing stores in inner-city locations, balancing the big-box superstore format with small-format stores that combine digital technology and physical space, and opening “temporary stores”.