The Global Upholstered Market Today and Tomorrow. Overview of the world upholstery industry based on CSIL latest figures. 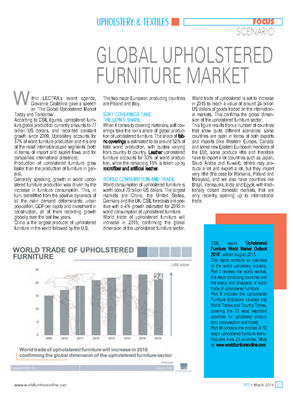 According to CSIL figures presented in the March issue of the review WORLD FURNITURE (69/2016), the upholstered furniture global production amounts to 77 billion US dollars, and recorded constant growth since 2009. Upholstery accounts for 17% of world furniture production and it is one of the most internationalized segments (both in terms of import and export flows and for companies’ international presence).

China is the largest producer of upholstered furniture in the world followed by the U.S. The two major European producing countries are Poland and Italy.

When it comes to covering materials, soft coverings take the lion’s share of global production of upholstered furniture. The share of fabric coverings is estimated to be around 52% of total world production, with quotas varying from country to country.

Leather upholstered furniture accounts for 33% of world production, while the remaining 15% is taken up by microfiber and artificial leather.

World consumption of upholstered furniture is worth about 70 billion US dollars. The largest markets are China, the United States, Germany and the UK.

For the full table of contents