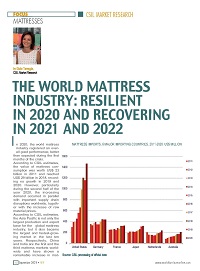 The world mattress Industry registered an overall good performance in 2020, better than expected during the first months of the crisis.

According to CSIL estimates, the value of mattress consumption was worth US$ 23 billion in 2011 and reached US$ 29 billion in 2018, recording no growth in 2019 and 2020. However, particularly during the second half of the year 2020, the increasing demand occurred in parallel with important supply chain disruptions worldwide, together with the increase of raw material prices.

According to CSIL estimates, the Asia Pacific is not only the largest production and export base for the global mattress industry, but it also became the largest and fastest-growing market in the last ten years. Respectively, China and India are the first and the third mattress markets worldwide and have shown a remarkable increase in mattress consumption in the last decade.

Consumption in North America increased in 2020, while Europe was virtually stable at about US$ 5.5 billion. The good performance of the world mattress market results from the increasing demand from large markets, the United States and China, in particular. Both countries had a consumption of mattresses (estimated at production value, excluding retail mark-up) of more than US$ 8 billion in 2020, registering increases over 2019.

At the global level, the import penetration ratio has increased from 16% in 2019 to nearly 18% in 2020, even though the period of crisis and difficulties occurred in worldwide trade. This trend was driven mainly by the increase in US imports.

FOCUS ON THE UNITED STATES

The United States is the largest mattress importing country and increased the value of imported mattresses also in 2020.

In the last decade, the imports from China have grown considerably, mainly driven by the increasing demand for bed-in-a-box mattresses addressed to bedding e-tailers and retailers offering this kind of products both online and in their brick-and-mortar stores. This trend has changed dramatically since 2019. Because of trade tensions between the United States and China and as a consequence of antidumping measures, the share of China on the total US mattress imports from Asia decreased in favor, particularly, of imports from Vietnam, Indonesia, and Malaysia.

In 2020, nearly 80% of US imports were from Asia (Indonesia, Vietnam, Malaysia). It is worth noting that in March 2021 the U.S Department of Commerce released its final determinations in the antidumping duty investigations of imported mattresses from Cambodia, Indonesia, Malaysia, Serbia, Thailand, Turkey, and Vietnam.

It might be noted that starting from 2019, some leading Chinese mattress manufacturers, moved to other South Asian countries, in particular Vietnam, Thailand, Malaysia. In response to more recent measures imposed by the U.S. to imported mattresses from those countries, some manufacturers started to realigning the production locations to minimize the impact on India, Taiwan, and Bangladesh.

Even more, the United States is the destination for establishing mattresses manufacturing facilities, both from U.S. companies and foreign manufacturers (mainly Chinese).

Coming soon: CSIL is currently gathering data and trends in e-commerce for mattresses. The new 2021 edition of the report ‘E-commerce in the mattress industry’ will be issued by the end of October.

Mattress companies wishing to cooperate with us will receive processed results of the survey by answering our questionnaire. Feel free to CONTACT US for more details.