The office furniture market in China and the Asia Pacific 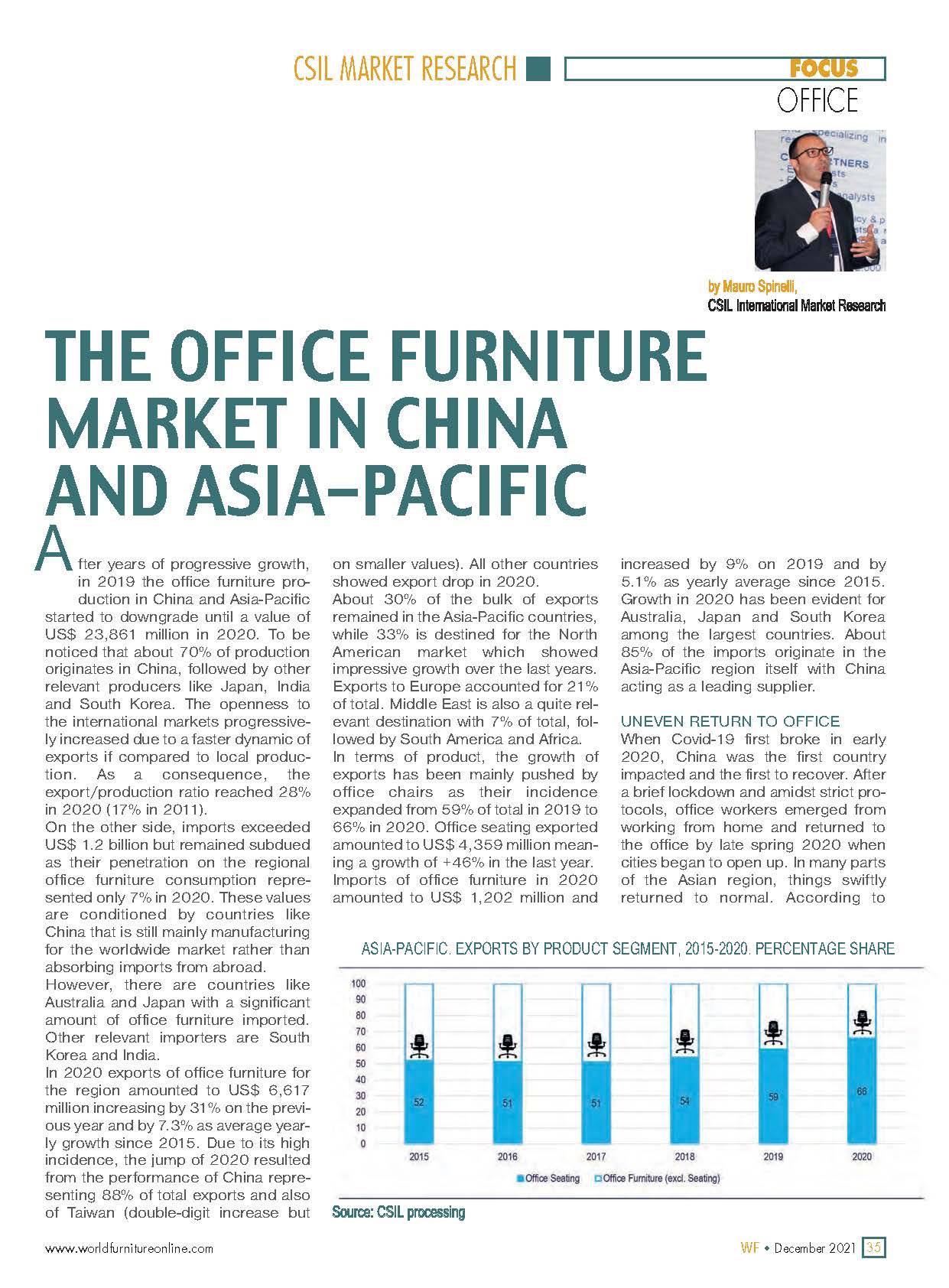 It is to be noticed that about 70% of production originates in China, followed by other relevant producers like Japan, India, and South Korea.

The openness to the international markets progressively increased due to a faster dynamic of exports compared to local production. Therefore, the export/production ratio reached 28% in 2020 (17% in 2011). On the other side, imports exceeded US$ 1.2 billion but remained subdued as their penetration of the regional office furniture consumption represented only 7% in 2020.

These values are conditioned by countries like China which is still mainly manufacturing for the worldwide market rather than absorbing imports from abroad. However, there are countries like Australia and Japan with a significant amount of office furniture imported. Other relevant importers are South Korea and India.

In 2020 exports of office furniture for the region amounted to US$ 6,617 million increasing by 31% on the previous year and by 7.3% as average yearly growth since 2015. Due to its high incidence, the jump of 2020 resulted from the performance of China representing 88% of total exports and of Taiwan (double-digit increase but on smaller values).

All other countries showed an export drop in 2020. About 30% of the bulk of exports remained in the Asia-Pacific countries, while 33% is destined for the North American market which showed impressive growth over the last years.

Exports to Europe accounted for 21% of the total. The Middle East is also a quite relevant destination with 7% of the total, followed by South America and Africa.

In terms of product, the growth of exports has been mainly pushed by office chairs as their incidence expanded from 59% of the total in 2019 to 66% in 2020. Office seating exported amounted to US$ 4,359 million meaning a growth of +46% in the last year. Imports of office furniture in 2020 amounted to US$ 1,202 million and increased by 9% on 2019 and by 5.1% as yearly average since 2015. Growth in 2020 has been evident for Australia, Japan, and South Korea among the largest countries. About 85% of the imports originate in the Asia-Pacific region itself with China acting as a leading supplier.

When Covid-19 first broke in early 2020, China was the first country impacted and the first to recover. After a brief lockdown and amidst strict protocols, office workers emerged from working from home and returned to the office by late spring 2020 when cities began to open.

In many parts of the Asian region, things swiftly returned to normal. According to Cushman & Wakefield Research, about 75% of workers in Mainland China reported they were in the office every day or nearly every day by October 2020, while in Hong Kong it was around 69%. Both markets have trended upwards since this date.

Elsewhere the return has been slower and hampered by the rise of the Delta variant in 2021. While recent data from the Japan Productivity Centre points to rising office attendance in Tokyo, showing daily office attendance increasing to almost 25% as of June,16 the government continues to request firms to maintain a 70% work from home ratio.

In Singapore, the Ministry of Manpower is also still advocating that employers must ensure no more than 50% of employees who are able to work from home are at the workplace at any one point in time. Similar government directives in Indonesia, the Philippines and Malaysia only allow for occupancy between 50% and 60%.

In Australia, Sydney and Victoria are enduring further strict lockdowns, while Brisbane and Perth remain open, but with border restrictions limiting the movement of people domestically between all states. Accordingly, office attendance is above 70% of pre-pandemic levels in Brisbane and Perth, but is currently near zero for Sydney and Melbourne, even though both reached over 50% earlier this year.

Currently, in India, Ahmedabad, Chennai, and Pune limit office occupancy to 50%, while Mumbai, Bengaluru, Delhi and Hyderabad do not limit the presence of employees in the office, though current office attendance is falling well below the 100%- mark. The primary reason for the gap is access to transportation, as only essential workers and those who are fully vaccinated are currently allowed on public transport.

It must be pointed out that there are several significant obstacles to the effective implementation of remote working in Asia. These include small residential spaces, the absence of dedicated areas for work and homes shared with other family members.

Several emerging Asian markets also have issues around inadequate infrastructure such as unreliable power supply and poor Internet access. Companies seeking to introduce long-term and large-scale work-from-home policies will need to invest in digital solutions to support remote working and ideally bear some of the costs incurred by employees working from home and provide electronic devices or hardware to employees.

Subsidies or reimbursement programs for occupancy and utility costs for employees working from home remain limited at present. However, several global tech giants, banks, and business services firms, along with a few Asia Pacific-based companies, recently announced the provision of allowances ranging from a few hundred to several thousand US$ for employees to purchase necessary equipment.