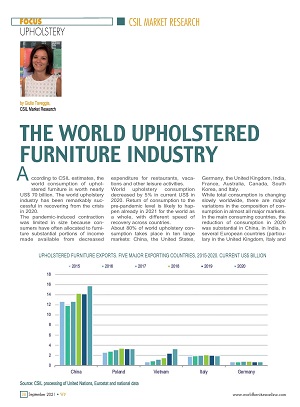 According to CSIL data published in the September issue of the Magazine ‘World Furniture’, world consumption of upholstered furniture is worth nearly US$ 70 billion.

The world upholstery industry has been remarkably successful in recovering from the crisis in 2020.

The pandemic-induced contraction was limited in size because consumers have often allocated to furniture substantial portions of income made available from the decreased expenditure for restaurants, vacations, and other leisure activities.

World upholstery consumption decreased by 5% in current US$ in 2020. Return of consumption to the pre-pandemic level is likely to happen already in 2021 for the world as a whole, with different speeds of recovery across countries.

While total consumption is changing slowly worldwide, there are major variations in the composition of consumption in almost all major markets. In the main consuming countries, the reduction of consumption in 2020 was substantial in China, in India, in several European countries (particularly in the United Kingdom, Italy, and France), and in Canada. Large markets showing a positive performance include the United States, Germany, Australia, and South Korea.

International trade of upholstered furniture has been increasing in current US$ every year since 2016. In 2020, the growth over 2019 was 4%, notwithstanding the pandemic.

Production localization is influenced, among other factors, by the convenience in sourcing labor, which makes some countries more competitive than others. This factor reshaped the sector geography and continuously affects the companies’ decision-making and investment strategies related to the manufacturing plants localization.

Growth rates are expected to remain positive in 2021 and 2022, although constrained by ongoing trade restrictions.

Companies that mostly delocalized part of the production abroad are headquartered in Europe (mostly to Eastern European countries), followed by Asian manufacturers and North American companies.

Almost all the companies headquartered in Asia, which have delocalized, have opened plants across other Asian countries (mostly Vietnam, Thailand, and Malaysia). Leading examples include Morris Holdings and Superb Creation. Some companies, mainly export-oriented manufacturers, opened facilities in North America (for example KUKA) or Europe (as Man Wah), in order to reduce time to market and overcome the recent trade tensions between the United States and China (as well as other Asian countries).