Facts and figures of the Italian market for upholstered furniture 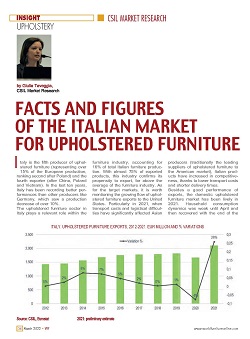 Italy is the fifth producer of upholstered furniture, representing over 15% of the European production, ranking second after Poland, and the fourth exporter coming after China, Poland, and Vietnam.

According to the CSIL report ‘The Upholstered Furniture Market in Italy’, in the last ten years, Italy has been recording better performances than other producers like Germany, which saw a production decrease of over 10%.

As for the target markets, it is worth mentioning the growing flow of upholstered furniture exports to the United States. Particularly in 2021, when transport costs and logistical difficulties have significantly affected Asian producers (traditionally the leading suppliers of upholstered furniture to the American market), Italian products have increased in competitiveness, thanks to lower transport costs and shorter delivery times.

Besides a good performance of exports, the domestic upholstered furniture market has been lively in 2021. Household consumption dynamics were weak until April and then recovered with the end of the restrictions, registering a significant increase.

The pandemic has given a new centrality to home, which has been redesigned as the fulcrum of all daily activities, with a need for greater comfort and multifunctional spaces.

The forecasts for the Italian upholstered furniture market have been revised upwards for the close of 2021, when the sector is expected to exceed the consumption level of 2019, fully recovering from the decline of 2020.

It should be emphasized that in 2020 the sector of upholstered furniture recorded the lowest contraction on both the domestic and foreign markets, compared to other furniture sectors.

According to preliminary estimates for 2022, CSIL expects growth of 4% in real terms in the consumption of upholstered furniture in Italy. This growth is in line with other leading European markets such as France and the United Kingdom, and higher than in Germany.

This growth path should strengthen particularly during the second half of 2022, to be continued in 2023.

FOCUS ON THE RETAILING NETWORK

Upholstered furniture retailing is quite different from other furniture products.

The large furniture chains and the organized distribution specialized in upholstered furniture sales control more than one-half of the market, which has reached a value of nearly 2 billion euros (at retail prices) in 2021.

The organized distribution of upholstery is the primary channel for upholstery sales in Italy. The leading chains belonging to this channel (Poltronesofà, Divani & Divani by Natuzzi and Chateau d'Ax) have a network of stores in almost all Italian regions and an average number of nearly 100 units per chain.

Other chains operating at a territorial level are Dondi Salotti and Divanidea, concentrated in the Central and Northern regions. In terms of procurement, these operators mainly rely on Italian subcontractors specializing in producing private label upholstered furniture in various districts.

Natuzzi, whose production of the Divani & Divani brand takes place primarily in the company's plants in Romania, announced in November 2021 its intention to bring this production back to Italy.

Unlike the chains specializing in upholstery sales, this channel is mainly served by imported products (mainy from Romania, China, Turkey and Poland).

Independent stores represent about one-third of upholstered furniture sales in Italy. It should be noted that some stores of the ‘traditional’ distribution are emerging to reach the economic dimensions of an industry and the capacity to attract foreign markets.

The breakdown of consumption of upholstered furniture in the four macro geographical areas of the country highlights how North Italy accounts for over 60% of national consumption. Center and the South Italy plus Islands absorb almost the same market share (about 20% for each area).