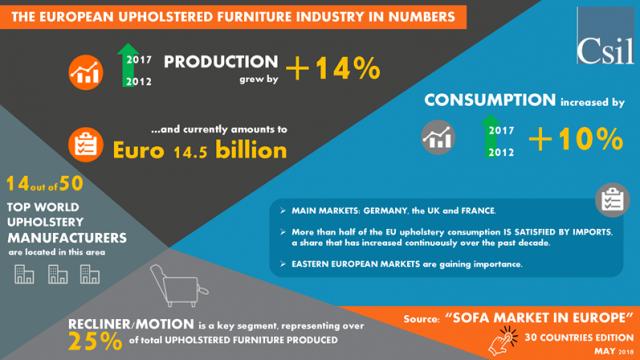 According to CSIL, the European consumption of upholstered furniture (valued at production prices excluding markup) was worth over Eur 14 billion in 2017, with different market performances across countries. Overall, the market increased over the last years and benefitted from an improved economic environment.

Germany is the biggest upholstery consuming country, followed by the UK and France. The New EU Members, although accounting for only 13% of the total European consumption, are the best performing markets.

Despite possible unpredictable uncertainties, the European consumption of upholstered furniture is expected to grow both in 2018 and 2019.

AN INCREASING TREND IN PRODUCTION 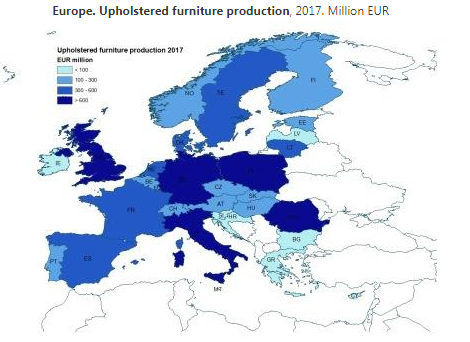 Over the last few years, the value of the European upholstery production (exceeding Eur 14 billion in 2017) showed an increasing trend. This is the combined effect of a positive performance both on the export and domestic markets, driven in particular by Poland, but also thanks to the recovery in traditional manufacturing countries  (i.e. Italy) and in other New EU members (e.g. Romania, Lithuania, Czech Republic).

Future perspectives are positive also on the production side, both on 2018 and in 2019. The growth will be sustained by traditional manufacturing countries, which keep being competitive on the export markets, and by other fast growing countries which are investing in production development.

POTENTIAL OF THE RECLINER/MOTION SEGMENT

The recliner segment in Europe is estimated to account for over 25% of the total production and, according to the leading companies operating into the recliner sofa market, this sector has the potential to grow faster than the stationary upholstered furniture.

The production of motion upholstered furniture is highly concentrated. Around 70% of the output is made in just 4 countries: Germany, the United Kingdom, Italy and Poland.

Europe is the headquarter of some of the biggest and most important upholstered furniture global players, recognized worldwide for their quality, their creative capacity for innovative designs and responsiveness to changing demands.

The European upholstered furniture industry is very fragmented. The level of concentration is not very high, as emerges if comparing the value with other segments (i.e office or kitchen) or with other countries (e.g. the USA, where a large number of very big companies has important shares on production).

The top 50 upholstered furniture manufacturing companies accounts for around 40% of European supply.

CSIL “Sofa market in Europe”, May 2018, is available for online purchase and immediate download at https://www.worldfurnitureonline.com/research-market/sofa-market-europe-0058467.html