Data on international trade of windows and doors cover (in addition to the 30 countries listed above), 40 other countries, for a total of 70 countries.

Breakdown of windows and doors production by material in a sample country . Percentage data in value terms 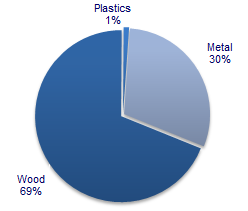 In terms of breakdown of windows and doors production by material, there are differences in the various countries of the world. For example as regard as the European countries, in southern Europe there is a preference for metal windows while in Nordic countries wooden windows are more requested.