The European market for RTA furniture

This report aims to provide information on the following topics:

STRUCTURE OF THE REPORT

The first part of the study shows the main sector figures of the European RTA furniture industry (production, consumption, exports, imports), highlighting the most important features affecting the industry in terms of competitive system and distribution channels.

Production and consumption of RTA furniture in Europe:

The competitive system analysis identifies and analyses the Top 50 European RTA furniture manufacturers, ranked by values of RTA furniture production, exports, and the number of employees. A list of leading players' major M&A operations from 2003 to 2021 is also provided.

The supply structure analysis deals with the type of products (product segment, support materials, and finishings) produced by the European RTA furniture manufacturers, with tables and information on companies operating in each segment.

Around 200 RTA furniture manufacturers are considered in the report.

By RTA furniture we mean the group of furnishing products which, according to the country of reference, are defined as flat-pack, ready to assemble (RTA), knockdown (KD), DIY (do it yourself), self-assembly or kit furniture that comes in flat-packs and includes all the hardware and instructions necessary for assembly. 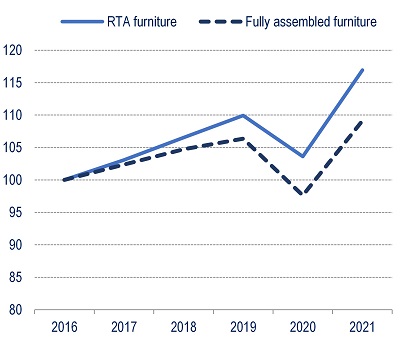 With a value amounting to over EUR 15 billion, the ready-to assemble (RTA) furniture industry throughout Europe outperformed the fully assembled one, recording a growth of about 17% (2016-2021). Poland and Germany are the leading producing countries. Over the last twenty years, Eastern Europe eroded market shares to some traditional furniture manufacturing countries.
On the demand side, the consumption of RTA furniture in Europe recorded a cumulative growth of +20% in the time span 2016-2021. Germany, the UK, France, and Italy are the largest markets for RTA furniture in Europe, accounting for over one half of the total market.